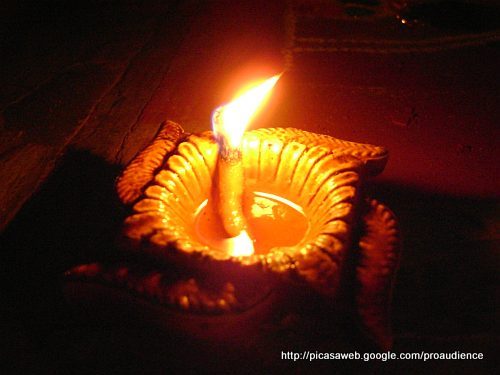 Having Diwali been celebrated with its usual fervor, time to be introspective again about the noise, the mass-indiscipline and the chaos surrounding the celebrations we have.

Think about this for a moment: The cuckoo living next to my window has not been heard since the last week.  It might be sheltering elsewhere across the more greener stretches of my own neighborhood. But, where could the pigeons, with so many of them residing all over Ahmedabad, go? And they need the skyscrapers to breed and survive, anyway, implying they had no way out but to live inside the war-zone highly frightened.

I like fireworks myself, but not in my immediate vicinity. Explosions and the resulting fire should not pose any threat to the human and nature’s presence around, but that isn’t how Ahmedabadis perceive Diwali at least, where even the small kids, leave alone adults, could get away playing havoc all around you. Trying to stop or challenging them would be utterly futile, since they/ we have been taught to rejoice Diwali just like this. A free license to public disorder, provided it was shared equally amongst all, is how we have been coded!

In fact, I used to do my own riotous bits before turning towards Osho’s legacy/ discourses and starting to meditate in my late 20s. A rendezvous that brought in several changes to my world-view. One of them was to shun all those actions, which may cause hurt to my own environment. The phrases like privacy and individuality may not be a priority for the rest others though, more so during a mass-celebration like Holi and Diwali. The Indians, who have a myriad of  socio-cultural shades and issues both, do not seem to care much about their own environment, and resort to mass intrusion and indiscipline during these occasions. A society that (falsely) inflates its own socio-cultural pride  (and hence lives with major contradictions) might just behave like that, methinks, i.e. resorting to solace in chaotic and violent means.

A loud firecracker leaves a caressing pair of doves panicked, even as I attempt to complete this blog-post, leaving the feathers flying across the branches they sat over outside my window.

Images I despise at:

– The people performing rituals and leaving the stuff in the middle of the roads.

– The people erecting and continuing to expand the illegally-made road-side temples, and others joining in to appreciate them as well.

– Drivers scratching to a halt watching cats intersect them.

– Anyone starts beating a Desi Dhol/ drum, followed by the equally zealot processionists, and leaves the whole traffic and the life around messed up.

– There goes again a small but gritty bunch across the street I live, even as I attempt to phrase this sentence. They seem to be conducting some marriage ritual, but that is enough to disrupt the life around me.

– You could blare horns, loudspeakers and even your own voice-cords, if and whenever desired and at whatever hour you might decide to please yourself.

– I’ve found the people of various faiths and social strata doing this. Jains in my area take out processions at their own discretion, at their own hour. While Muslims blare all their energies out from the nearby Juhapura mosques, when the whole world has yet not awoken after a full-night’s sleep.

– I don’t mind melodious and non-intruding spirituality, but, how often did you get to listen an Azaan of this nature in the real world? (Check out the two lines rhymed somewhere in this song.)

– I remember a SADHU/ Hindu devotee at this moment, who would earlier visit my locality at 5:30 am. He was so melodious, that I would try listening to his bits as long as possible whenever I could, and wonder each time why didn’t we have singers/ musicians of his caliber in the mainstream entertainment. But the fellow who has replaced him is proving out to be a major headache these days, as I scurry to keep my ears squeezed under my own palms each morning.

– The people smoking into your face during the early morning walks, when they should be inhaling and allowing you to breath fresh air.

– The people coughing, sneezing and spitting all around the public places.

A zillion more instances can be added apart from the described  ones …. from a crass and unaccountable mainstream media to the ‘music and soul-less’ Bollywood, and from a rootless pseudo-intelligentsia to the bankrupt Delhi ‘Sultanat’, but would like that to be dealt by the rest others.

And This Is How Many Others Mark The Occasion! Full Of Light, Festivities And Colors!

PS – The cuckoo has returned back since then. This piece was written soon after Diwali.