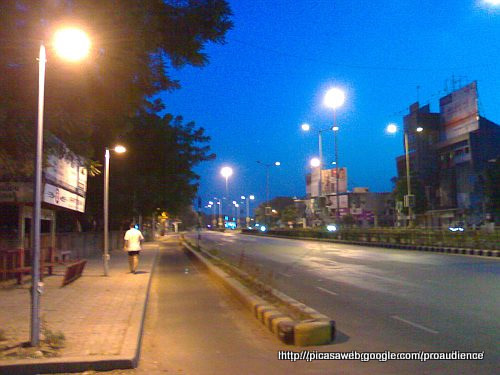 Sharing a link to my latest Picasa album tonight. Most of these images were taken from my aging Nokia N72 and a few others from Sony Digicam, including those by my two nieces as well. The time period being mid-late-2010. Most shots were taken several times on a few locations, thus making it somewhat repetitive. But, I shall try streamlining it further when I spend extra hours on Picasa later. Already enough spent on selecting, resizing, watermarking and uploading the whole work.

I like capturing the lonely streets, the neons, sodiums and the bluish tinge of my neighborhood when walking past it at early hours. So do I like registering the moments of my immediate vicinity during the day hours. One key missing aspect of the peek through my cellphone camera is the hectic city of Ahmedabad itself, which I can’t capture in the ongoing scenario anymore – Read how an arrested LeT recruit had recced and vediographed my neighborhood for a major terror strike early this year.